I wanted the Pats to win. Meh.

Other than that though, was anyone shocked by the lack of creativity in ads during the Superbowl? "Hey, our beer's in a blue bottle." doesn't really strike me as great advertising. The Hundai ads were at least a little creative, although why didn't the guy get in the cheetah cage to get away from the cat?

The thing that really surprised me were the number of "rebuilding" ads. GE talking about the good things they do to help americans with MRIs and turbine generators. (The beer tie-in was pretty fucking forced though.) Or Clint Eastwood saying that america can be great again. You can see my earlier post, but I don't see how that's a hopeful message right now. Unless we're willing to open our eyes, we're stuck in this shit, and I don't see anyone looking around right now.

Ruling those out, there were only three commercials that exemplified what a Superbowl commercial should be to me.
END_OF_DOCUMENT_TOKEN_TO_BE_REPLACED

I dunno what took so long for the queen to recognize greatness when he's been "making it so" for practically 20 years, but whatever. The captain is now rightfully a knight and by golly if he isn't about the most handsome man I've ever seen. 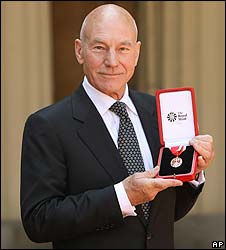 I'll start with the clarification that K and I make a strong effort to buy locally when possible, to see if a local retail store has a comparable price on a given product that we're looking at. We subscribe to a weekly CSA box, partly for the health benefits of non-poisoned (organic) fresh fruit and veggies, and partly to support local & small-scale agriculture.

In light of this, it was rather frustrating this past week when I tried to buy a new HDMI cable. I stopped by a RadioShack while on a grocery run, I tried Sears & another electronics store, then another Radioshack yesterday while going to the post office. Nowhere could I find an HDMI cable for under $35 (at Sears), and at RadioShack the options were $44, $65, or $79.

Now, that'd be fine, except that HDMI cable markups are one of the biggest retail scams out there. Multiple well-respected reviews (cnet, Popular Mechanics, more) say that you should never pay more than $10 on an HDMI cable.

In the end, I got a high-quality DVI Gear cable from Amazon.com for $2.50 (with free shipping). One one hand, I kinda can't blame retail stores for not stocking reasonably-priced cables, since it's probably not cost effective. For one, selling a cable that cheaply would probably result in a negative profit margin, given stocking and other labor costs. Plus, HDMI cable varieties are confusing, and if you present people with a false choice between Monster ($70 to $100) and an "on sale but still good" $40 option, and since they've probably just dropped $500+ on a new TV, they'll happily take the value (or spend the extrar $$ for perceived extra quality). So, yeah, I can't really blame them... but it's frustrating, and also kinda sad in a "I understand where the right-wing conservative I-miss-the-good-old-days obstructionists are coming from" way. I don't mind paying a 5% premium for healthy food, or for locally/US-made products, but I'm not going to pay a 1000% markup - and I'm bummed I have to make that choice.

(Thanks to Deadspin for this.)

It's a slow Sunday, but this clever bit from a Canadian adult entertainment company is worth a chuckle or two, or at least a chuckle and a half. Who knows, maybe they just grabbed some outtakes from Girls Next Door?

[Note, this post got stuck in Drafts and didn't actually post, I only just caught it now. oops]

For my entire life, the Winter Olympics have been my favorite sports season, a marvelous binge of athletic cosmopolitanism, guilt-free patriotism, and the novelty inherent to a non-annual event. As a child, every four years I would spend a 17-odd days lying on the floor of my grandparent's living room, living and dying with the exploits of athletes whom I had never heard of before, and likely never saw again. To me, happiness was waking up to freshly-fallen snow, going sledding all day, then spending an evening of hot chocolate, popcorn, and Al Trautwig/Mike Adamle/etc.

Clearly, my nostalgic expectations for the Olympics are unfairly high, but even recognizing that I can't help but worry about the upcoming Vancouver games. This has nothing to do with uncertainty about the US Men's Hockey team (very young, though nearly not as young as the 1980 team), or whether the Alpine team led by Bode Miller and Lindsey Vonn will again underwhelm. Nor am I talking about concerns that the sliding track is too fast , though after a Romanian luger knocked unconscious after slamming into several walls during a training run yesterday, safety worries can't be ignored.

No, instead I am nervous about the way in which I will be allowed to consume the Olympic experience. NBC has been very vocal about the exorbitant cost they paid to secure exclusive domestic broadcast rights (negotiated back when CDO was a meaningless term that only mattered to nerds at Goldman) as an excuse for their decision to cram all the high-ratings events into the "prime-time" package. Fortunately it looks as though the "minor" sports - curling, cross-country skiing, ski jumping, etc - will gain at least some airtime on the cable options (CNBC, MSNBC, USA, and my new favorite channel, Universal Sports).

I worry, however, that the main-peacock-channel programming will be virtually unwatchable - especially for those of us on the West Coast, who will be forced to watch almost everything on a three-hour delay, despite being in the same time zone as Vancouver. The last few Games, Summer and Winter, have witnessed the submission of the Olympic Spirit to the Olympic $pirit. If it can't be compressed into a twelve minute overproduced, self-contained, and overly-scripted segment, it's not worth showing, according to Dick Ebersol. Perhaps envious of Fox's lucrative and repulsive American Idol franchise, I fear we are going to be spoon-fed a three-week dose of Olympic Idol. Hopefully we'll get at least a few bits of actual sporting events in and amongst the reality show nonsense, but I'm not terribly optimistic.

Certainly there are exceptions, but if you haven't been watching Sportscenter the past week, then check this out.

What's really impressive (and slightly disturbing) is that none of the major offenses even drew a card - she ended up with just one yellow for a "minor" trip.