There are things that I know I don't get. I like catchy pop songs and by the time a band hits its third critically reviewed experimental album they've lost me. I don't keep in mind the history of what they've done to fill in the blanks so the new music fits into a cohesive whole. Dance is somewhat the same. I understand that people are passionate about it and I can appreciate the precision of fine ballet, but the misteps and experiments of other dance just make me wonder why someone would bother.

That leads to this evening. As a professor, I try to always attend events that students invite me to. It's important not to just be the voice up in the front of the classroom, but to be a person too. And, generally, going to events is fun. Three of my students this semester were in Whitman's final dance recital and despite my lack of understanding of dance, I said that I'd go.

(As a side note, I'm continually amazed at the huge fraction of Whitman students who go through my classes. It's something like a quarter of the student body.)

Then two of my students in an Irish dancing group. It looked like Irish dance, it sounded like Irish dance. It was, frankly, pretty good. And, after a semester of having students in class, it's very interesting to see how their personalities are reflected in their dance. Very precise and controlled, the same as in lab.

Next, a dance set to Taylor Swift. Hmm... (None of my students in this one.)

Then came a turning point. I had forgotten that a third student had rescheduled lab due to dance practices, but she appeared in the fifth act. I don't know if it was a plus or a minus that the dance was set to Adele, but it worked. In most performances, there's a moment where suspension of disbelief is required. A movie has to make you believe that it's real, a play has to draw you in. It's generally the acting that does it, not that the people in the performance are ACTING, but that you forget that they're acting. Katie made me forget that she was just dancing. There's a very interesting contrast, in lab she can be somewhat timid, but on stage she danced with abandon. Where other dancers were obviously concentrating on the person who was going to catch them, she flew with the faith that she would find solid footing when she came back down. It was really hugely impressive.

And that set the stage for one last round of Irish dancing and the final number, "AIRPORT!!!" which carried on with amazing performances from the dancers and very inpressive choreography that surprised me again at how multitalented Whitman students are.

And it's not that I've drunk the Kool-aid that deeply. There were problems with timing and awkward height differences between the dancers and issues that needed full-time practice to fix when the only practice time available is squeezed between classes.

In all though, after the first little wobbles, art.

The working title of this post was "Why I love football (round ball) and dislike football (pointy ball) and really should dislike them both".

The background of this is that, in general, I dislike events that depend significantly on luck or random chance. I suspect this sentiment may well be common among scientists, maybe particularly physicists, since I/we like to be able to know things, to predict things, or at least for things to be knowable or predictable (were there enough time to analyze the situation, take data, etc).

This is certainly the case when it comes to sports. Americans especially seem very fond of declaring one team to be "world champions", based upon some kind of playoff... but by its very nature a playoff increases the leverage that random chance plays, because of the smaller sample size. To my mind, the European soccer leagues handle the topic appropriately; each team plays every other team twice, once at home and once away, and the team with the best record at the end of the season is the champion. Not the #1 seed in the playoffs, because what's the point of the playoffs when you have demonstrated that you are the best team already?

March Madness is a brilliantly exciting construction, perhaps the best playoff system in terms of fan enjoyment, but does it do a good job of sorting out which is best team in college basketball? No way. The Super Bowl is an amazing showcase of the sport, but does the NFL playoff system properly sort out which is the best team that year? Sometimes, but often not. The World Series has great majesty and a nostalgic tradition that rolls back the decades, but it's a stupid way to crown a "champion" after the teams have already played 162 games - the very definition of a non-small sample size.

And now we come to the working title... not only does my rational/non-sports-fan side dislike playoff systems, but I dislike sports that themselves have outcomes for which randomness has strong significance, and the "meaningful moments" of a given game are few enough that the outcome of the game depends on a small sample size. A corollary to this is that I dislike sports for which the judgement of an official/referee can significantly influence the outcome.

Thus, I *should* like baseball (and I do), and cricket, and [what else?], and *should* dislike the NFL (it's love-hate), the NBA (referee arbitrariness), and soccer (but I love it). Really, I can't defend my love of soccer given the fact that the outcome of a given match depends on often no more than 3-5 referee decisions or other pivotal moments... but I do, even though I despise the NFL's volatility in the very same manner.

That's really all I got. I was curious to see if, as I wrote this, whether I arrived at any kind of conclusion, but it hasn't arrived yet. Anybody else able to help me out?

Look, hero-worship of athletes is dumb. Heck, all of sports is dumb. Ben Roethlisberger is paid a billion times more than the combined salaries of all Pittsburgh elementary school teachers? Pathetic.

But, it's still pretty neat when pro athletes aren't too cool to respond to fans:

P.S. Not swayed by the above? Two words: mullets & mustaches.

The lesson he learned from all of this?

"Man, wear your seat belts," Brady said. "That's all I can tell everybody. You never know."

Oh yeah, and drive an Audi S8 (as your loaner). Am I more jealous about Gisele Bundchen or his other car, an R8? probably the latter. 🙂 In case you've carefully avoided any sports-related news, you've heard about how basketball player LeBron James left Cleveland to sign with the Miami Heat, and in so doing almost broke the internet. The decision to go to Miami was defensible, but the manner in which he did so - a pre-announced special hour-long TV program - was not. The most concise analogy that I've seen for this was that it was like calling all of your girlfriend's friends and family, telling them that you're going to propose on the Jumbotron at the Super Bowl, but then at the last minute turning around and popping the question to the cute ice cream girl.

Oh yeah, and there's also this soccer/football/futbol tourney in South Africa. Seriously, even if you don't like sports, tune in to ABC at 2:30 EST tomorrow (Sunday) for the World Cup Final between the Netherlands and Spain... especially if you have HD. For all the stupid things that FIFA does (don't get me started) the fact is the Beautiful Game really outshines all the nonsense, in the end.

Finally, you really should check out this Top 10 Moments of Sportsmanship... pretty neat stuff. 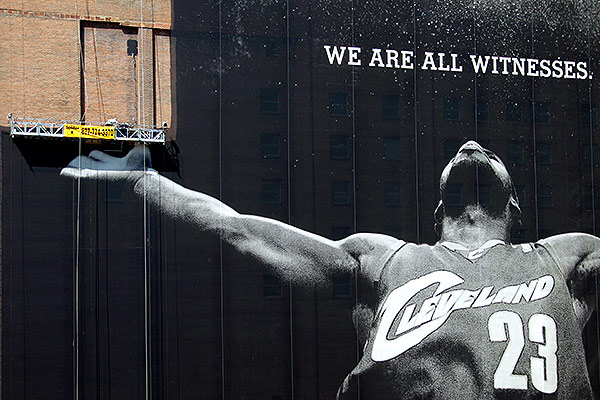