This was supposed to get posted before Anna Katherine was born, but so it goes. Still an interesting wrap-up of the rules that other nations have regarding what parents can and cannot name their progeny.

Denmark's very strict Law on Personal Names is in place to protect children from having odd names that suit their parents' fancy. To do this, parents can choose from a list of 7,000 pre-approved names, some for girls, some for boys...
If you want to name your child something that isn't on the list, you have to get special permission from your local church, and the name is then reviewed by governmental officials.

Last week a St Thomas cabbie laughed at me when I was moaning about having to go home to California, and he had a good point - there are many nice things about SoCal, and the Golden State in general. We have great weather, a stunning coastline with equally majestic mountain ranges, inspiring Redwood groves, fertile soil, the global center of technology (Silicon Valley) and entertainment (Hollywood), and the best public university system in the world.

So why then is CA's state budget in the crapper? I think there are a couple reasons, both of which are legislatively self-inflicted, and both of which sound like good ideas on the surface but instead serve to destroy democratic representation. Firstly, a two-thirds majority is required to pass state legislation. Sounds like a good idea, right? Well, instead it means that small group legislators can hold the entire state hostage, a tyranny of the minority where a budget supported by a majority is held in limbo.

This is bad, but pales in comparison the what I view as the main problem: ballot initiatives. Again, allowing the people of California to be directly involved in governance is a great idea - that's pure democracy, right? Instead, it's a mess, and one reason why our founding fathers went with representative democracy.

There are two big problems with ballot initiatives. First, the referenda are confusing and necessitate the reduction of complex issues down to a simple yes/no vote. In order to make an educated decision, each individual citizen must attempt to be an expert on the subject at hand, be it clean energy technology, education reform, tax law reform, etc. Would we want all Americans to vote on which design NASA should adopt for the new Shuttle replacement, or to decide our foreign policy towards North Korea? Could we trust the entire American voting populace to educate themselves on the ramifications of a change to affirmative action? No, we elect people to study an issue and then make an informed decision.

The second, and to my mind more insidious problem with ballot initiatives is that they completely circumvent any kind of campaign finance regulation. There's no point in trying to limit the degree to which lobbyists can pay/influence a particular legislator if they can just pay for their own ballot initiative - why both buying a legislator when you can buy a law directly? We had two examples of this in last week's election, Props 16 and 17 (luckily they both failed), which were very clear power grabs by PG&E and Mercury Insurance, the kind of which could never be achieved if the companies had to lobby the entire legislature. Technically there are limits as to how advertising for a ballot initiative can be paid for, and you're not supposed to pay people to collect the requisite signatures to get an initiative on the ballot, but these have not been adequately enforced. So, in the end, it's not "one person, one vote", it's "one million dollars, one vote".

There are other problems with the system, clearly, but the two items above I think have served to put California its current broke/indebted position. When California's economy was humming along happily, the uber-rich were able to slowly chip away at the state tax system, and so slowly the margin for error was eroded. Then whenever it was evident that some kind of reform or visionary legislation might be needed, a 1/3 minority of state senators was able to hamstring the process. Thus, progress was halted, even as special interests were able to buy specific ballot initiatives. Combine this with the foolishly-short term limits (a lifetime limit of 6 years in the General Assembly and 8 years in state Senate), by the time a legislature finally figures out how to actually govern, he's kicked out, and a new greenhorn has to learn the ropes all over again. I can't imagine the same policy catching on in corporate America, for example Steve Jobs being booted from AAPL after 8 years? Not happening.

Clearly the state (and nation) are increasingly polarized and reluctant to even engage in legitimate debate, but that's all the more reason to allow our legislators to actually do their job.

Downtown Walla Walla is absolutely full of winery tasting rooms, my walk to get lunchies takes me past a dozen or so of them. Yesterday though, I noticed something interesting, the "Faces" winery had a huge orange sign posted on their doorway.

Apparently, they haven't been filing monthly tax reports, and if you fail to do that for three months, you get shut down for 10 days. Luckily for them, the 10 days came after the spring release weekend and before Whitman graduation so it shouldn't be a huge economic impact. The sign itself though is kind of masterful. It says why the place is shut down and for how long, but then there's some great fine print. 1) The huge very visible sign can't come down until after the shutdown. 2) You can put any signs over the top of it. 3) You can't put up any other signs saying "We're closed for vacation" or anything like that. You have to clearly show that you're closed because you got shut down.

So, not only is your business closed, but your nose gets rubbed in it. That would definitely make me file things on time.

Looking past/beyond the social, moral, and legal ramifications of SB1070, DailyKos has an interesting look at the economic impact, specifically on Arizona's tourism industry.

Usually the US State Department issues warnings along the lines of "don't go on a cruise off Somolia" or "don't be flamboyant in the Middle East" or "don't protest on bahalf of the Dalai Lama in China"... but yesterday the Mexican government warned its own citizens to use extreme caution if visiting Arizona. For all that I can say "I couldn't vote against that crap", I'm still an American, and an American state came up with that law... so it's pretty embarrassing. And the next time I take a trip down to Baja, if I'm strip-searched at the border just for being anglo...? I won't like it, but I can't say I won't understand where it's coming from.

According to a University of Arizona study, Mexican visitors spend more than $7.35 million daily in Arizona's stores, restaurants, hotels and other businesses, and the AZ tourism board estimated that visitors from South of the border accounted for $3.61 billion in sales in 2007-2008. Oops.

Recognizing both the impact of sports in broader society and the ~30% Hispanic representation in MLB, there is also a push to have MLB boycott or relocate the 2011 All-Star game. Note that there is a direct precedent for such an action: in 1991 the NFL moved the 1993 Super Bowl site from Phoenix to Pasadena because of Arizona's non-recognition of MLK Day (AZ Gov. Evan Mecham rescinded MLK Day as his first act in office in 1987).

Not that the party of hate is terribly rational about such things, but: 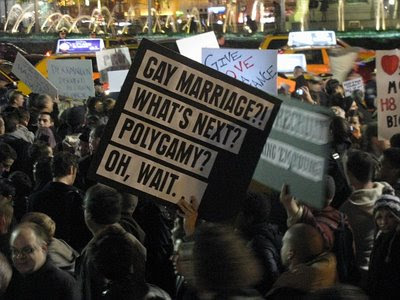 By which I mean, on behalf of Nick, go Nuggets!

The first round of the NFL draft was this evening, and while I can only imagine how exciting it is for the players and families involved, one of the most surprising results of the night was Denver taking TIm Tebow with the 25th overall pick.

Josh McDaniels just based his job, and given his age, his career as a head coach, on the poor throwing mechanics of the most polarizing college athelete since (perhaps) Lew Alcindor. The Patriots coaching staff takes a lot of fire for arrogance, but in this case, for Nick's sake if nothing else, I sure hope that McDaniels' ego isn't writing checks his coaching can't cash.

Personally, I think that Tebow would be a great teammate, as long as he kept his mouth shut in the locker room about the evilness of gay marriage and the importance of giving-your-life-over-to-the-one-savior-who-is-Jesus-Christ-our-Lord.