Two of the blogs that I read just had contests to provide new idioms and replace worn-out cliches.

Some of the phrases are worth noting.
From The Morning News:
The hand moves the mouse. (You're responsible for your own mistakes while using a computer.)
Throw down some flowers. (Buy flowers only to get out of trouble.)
If a bird can't fly, it walks. (Get off your ass and do something.)

...who successfully defended his Ph.D. thesis at Rice today! 🙂

I believe that Madhu summed it up best in his e-mail to me: "Yeeeeeeeeeeeeeee, I am done. everything went more than better."

Hard to top that, folks. Plus, we got ourselves a new superlative phrase: "Everything went more than better." Define it however you like it to be defined, just be sure to use it. 😛

First, there's a group on facebook called "Make Genocide History" or something similar. Whenever I see the title, I always add a "by ..." to the end. Depending on the day, the ellipses get replaced by a method and a ethnic group. It's never pretty.

Guy Fawkes' Day is a bit of an odd holiday - what do you celebrate? The effort to blow up a corrupt government, and honor the efforts of a folk hero? Or the foiling of such a plot, a victory against terror? In the wake of 11th Sept, lots of people have thrown all sorts of extra meaning onto an innocent little holiday, too. In England it's losing ground to Halloween, while Scotland has the 31st as a separate event: Halloween is for guising, the 5th is for burning a Guy and going to parties. 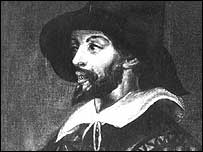 ...but what if he'd succeeded?

If you have some time to waste, this is a pretty funny blog.

Kinda interesting headline on WebMD last week - is there a correlation between relative finger lengths and athleticism?  They say that "for women whose second and fourth finger lengths translated into a low ratio, there was greater likelihood the women played sports at higher levels, the researchers report. A low ratio would result if the index finger is shorter than the ring finger."

First of all, terminology question: isn't the index finger the first finger, the middle finger the second, the ring finger the third, and the pinky the fourth?  Don't remember that from Aberdeen.

Second, a negative number is a "low ratio"?  They need to be a little more clear/precise, here.

You might have thought we had 9 planets in our solar system. If you were nerdy enough to keep up with current events (and most of us fit in that category), you might have said 12. But you'd be wrong there too - Pluto just got fired, so we are down to 8 actual planets.