So I love a good xkcd as much as the next nerd, but this one got me thinking a little too much: 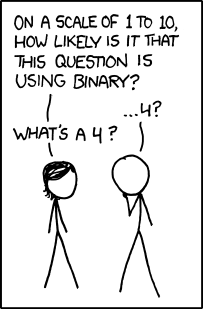 P.S. I'm sure the internet has an answer, but at this point I don't feel like looking. Or rather, it's kinda fun remaining ignorant and spending a couple minutes pretending Google doesn't exist.

Later this month I’m teaching a two week introduction to spinning course. Here is one of the spinning tools I’ve built recently, a kick spindle. As a starting point for my design I read this post by Layne Brosius, a.k.a. AFrayedKnotter. My kick spindle is pretty similar to hers. There are two major differences. The first is that I used a 1″ thick piece of poplar with feet, as you can see in the pictures. The weight of the flywheel (a furniture bun foot from Lowe’s) seems to give the device sufficient inertia both to spin for a while and to not slide across the floor during use.  I’ve only used the kick spindle on carpeting and outdoor cement, but I think if I put some rubber feet on the bottom it would stay in place on wood or tile, too.

The second significant change I made is in the bearing design. Most kick spindles I’ve seen use roller bearings, like you’d find in a roller skate. That would make the spindle turn longer between kicks, but nice bearings are expensive (especially if I’m looking to build ten of these in a class), and I don’t really mind kicking in a rhythm, since I’m used to treadling on a wheel anyway. Instead of a $4 skate bearing, I came up with something that costs a dime, namely an actual dime: I drilled into the base at a 45° angle with a ¾” spade bit then super glued a dime onto the floor of the angled hole. I put a divot in the dime with a 1/16″ metal bit.

In the divot rests the sharpened metal point of the spindle. To point the spindle end, I nailed a small finishing nail into the center of the 1/2″ dowel that I used for the spindle (I used 1/2″ dowel because I have a 1/2″ in drill bit but not a 3/8″ one. If I had the 3/8″ bit, I’d probably go with the 3/8″ dowel).  Next I sharpened the end of the spindle by cutting away excess wood with a knife. This leaves the small nail head sticking out the end like a pencil lead. I sharpened the head with a file:

The photo doesn’t really do justice to the sharpness of the tip. (but yes, that is a dvd of Flash Dance behind my hand. I’m a spinning maniac, maniac, and I’m spinning like I’ve never done before…) The spindle will go through twelve to twenty rotations per kick:

I spun a few ounces of wool from rolags in a hotel room while watching Elf over thanksgiving weekend.  The kick spindle works pretty well.It fits in car much more easily than a spinning wheel–with a convertible car seat in the back of my Corolla, there’s no way my Saxony wheel would fit anywhere in the car anymore. It’s fairly lightweight, but heavy enough to stay in place. It isn’t as portable as a drop spindle, but the winding on procedure is a bit more efficient. Also I’m still not very good at long draws on a drop spindle, but it’s easy to spin short or long draw on the kick spindle. The kick spindle can  accommodate a very large cop of yarn, So I can spin more yarn before winding balls for plying. Winding directly off the kick spindle is also very easy.  Total cost for the whole thing was about $12. If you wanted something a bit more aesthetic, you could use a plaque with a routed edge for the base and stain the whole thing.

I often take many photos in rapid succession. When reviewing them later, I have this habit of repeatedly toggling two or three photos back and forth if the result looks funny. Sometimes I do it until my eyes tear up. Here is an example set to music. Hopefully Owen will forgive me…some day.

The first two shots are about a minute apart.  They’re 60 second exposures (it takes another 60 seconds to empty the buffer onto the card). If you download them and toggle back and forth you can get an idea of the movement of the auroral structures over time. You can also see the big dipper moving.

My office mate and I were just talking about the sunny 16 rule, and it occurred to me, "Why don't any widely available lenses allow you to continuously vary the aperture within the mechanically available range? (or are there some that do?)"
If I'm shooting film without a light meter (or digital without a light meter for that matter, but when does that happen?), then I see obvious merits to only having sqrt(2) increments in f-number, and the nice-looking reciprocal-integer shutter speeds that fall close to sqrt(2) increments in time: It makes it easier to quickly calculate the aperture and/or shutter speed that you want in a given situation. You can reckon more quickly if you only have to deal with factors of 2 (or sqrt(2), whatever...). Also it would often be painfully slow to scroll through a "continuous" (or at least much more finely spaced) spectrum of apertures while you're shooting.

However, most cameras now have aperture priority and shutter priority modes. I don't see any reason why I shouldn't be able to dial in an f/2.718 aperture and have the camera calculate the proper shutter speed. Nor do I see why conversely I couldn't set a 0.154 second exposure time and have the calculate an appropriate aperture for me. Of course, the camera could still warn me if the "appropriate" parameters fell outside the realm of possibility for the equipment; that's what my current camera does.

I guess one short answer would be that the current level of discrete f-numbers are finely spaced enough for most purposes, and that maintaining them maintains continuity with the traditions of photography. I wondered though, does anyone (basically meaning Nathaniel 🙂 ) know of a mechanical reason why continuously variable aperture would pose any problem? I can think of only a few highly specialized situations in which this feature would actually be desirable (and that's probably why it isn't generally available), but I thought I'd throw the question out there.

I first became aware of online “What will our baby look like?” services when I was in college, about a decade ago. I played with them once or twice, usually using a something like picture of myself and a tiger, or two unlikely celebrities, e.g., Kelsey Grammar, and Dennis Rodman. Most of those turn-of-the-century online services were really pretty crude. If I took two face photos, and layered them in Photoshop or Gimp with 50% opacity in the top layer, I’d get pretty similar results to what most baby-morphers were offering circa 2001. Well, they’ve made some improvements. There are fewer distracting artifacts, like extra ghost ears, blurry eye borders, or baby goatees.

I was, however, quite surprised at how badly a modern baby-morphing service performed this evening when I used two iSight photos of Beth and myself to generate a composite baby image. It turns out we’re having a Klingon:

I’m guessing the auto-skin-tone-detect feature was confused because Beth was back lit in the photo above. I can’t explain how makemebabies.com decided to include a saggital crest on our digital baby’s skull, nor why the baby has sharpened teeth…

With a little finagling the baby image maker managed to yield some more reasonable results as well. Here’s an animated tour of the reasonable and unreasonable Sullivan baby faces:

ETA: As per Beth’s recommendation below, I wanted to let everyone know that other than the Klingon baby, all the non-Caucasian looking babies were the result of my checking the “very dark” or “Asian” box on the final page of the baby generator. The Klingon, however, resulted from the “auto-detect skin tone” option. Also, my recommended mental soundtrack for the baby morph video collage is the theme song from Growing Pains.

Photo credit to Baskerville, here we are provided with a graphic depiction of whisky abuse.