Beth, Owen, and I are on a road trip to visit some friends and family. Many rest stops in Maine are nicer than some camp grounds I’ve slept at. Most of them feature a variety of signs suggesting stretches to do while you’re out of the car. Is there anything like this in your neck of the woods? Some of the “stretches” can even be done while you are actively driving, as this next sign illustrates. I think that the singular buttock is a much funnier word than its more commonly heard plural form. I do this one whenever I have to get toll money out of my wallet.

The next sign suggested having a “healthy” snack. I had to wonder why the quotation marks were necessary. Are they implying that the pictured apple is not truly healthy, or that if you have a snack, you should at least call it healthy to make yourself feel better about your between-meals-pick-me-up. I further investigated the “healthy” snacks inside the rest area building. The green dot on this note reminded me of the one I’d seen subconsciously on the sign outside.

I looked over the contents of the vending machine and noticed that not a single snack item featured the green dot of health. The machine next to this one offered nothing but wall to wall Red Bull. Fortunately we brought some green dot type snacks with us.

The raised beds make it very easy for him to stand and harvest radishes. Fortunately they were ready to be harvested. He also deadheaded some live heads on the marigolds. Here is some of his handiwork, which became a radish tart later that same day, and his breakfast the following morning. The “Ichiban” Japanese eggplant is coming along.

I finished Owen’s mini Aran sweater a little over a month ago, but never got around to doing an FO post on it until now. Here it is: 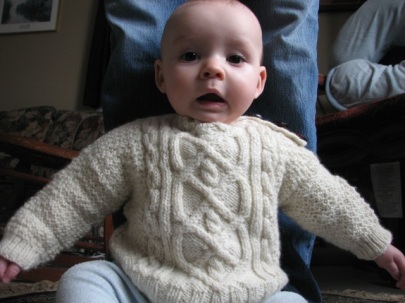 The pattern is Baby Poonam, a free Berroco pattern. In the original pattern, the cables just sort of end after reaching their point of maximum horizontal travel. Maybe it’s not clear what I mean by this, but if you compare the photos above to those on the pattern page, I think you’ll see.  Looking at that pattern, it seemed to me that the eye sort of fills in the rest of the cable after it ends in the pattern. I like cables and saw no reason to have them end in empty space, so I just filled them in. I knit this in the 6 month size with Cascade 220 Superwash on circular US4′s and 6′s. Owen will be 8 months old in 5 days!  Hopefully it will fit him for the rest of sweater weather season this year.

Do you know that song, Sweetly Sings the Donkey? It’s to the tune of Itsy Bitsy Spider, but it’s hilarious. I love the idea of a donkey singing sweetly—at the break of day or any other time. In any case, I was making up a version of the song about Owen, “Sweetly sings the Baby” and singing it to him (after an introduction on the recorder, of course). Instead of the hee haws, I inserted an impression of the sounds he makes if he’s unhappy in the morning. Apparently my impression (which included lip quivering, and crying so hard that I had to gasp for air before resuming the cry) was a bit too realistic for Owen, as it caused him to cry exactly the way I was imitating, even though he’d been in a fine mood. I guess it’s upsetting to see dad in distress.

According to my reading, the oldest evidence of spinning with a wheel (as opposed to with a drop spindle or supported spindle) dates to about 1500 years ago in India. In its simplest form a spinning wheel is just a sharp spindle connected bicycle-style to a drive wheel. The drive wheel is large, the spindle is small. So when the drive wheel turns once, the spindle turns many times to generate lots of twist. Small Indian wheels of this driven spindle type are called charkhas. They are well suited to spinning short fibers that need lots of twist in order to hold together–namely cotton. I figured this would be the easiest sort of wheel to build, and it actually was pretty easy to build a usable one. Here’s Rhianna checking out the finished(ish) product:

The main drive wheel is a 12 inch circle cut from 3mm thick birch ply wood. I used a coping saw and did this at my desk. If one had a scroll saw and a work bench it would be much easier.

The spindle is a smallish knitting needle, probably  a US2 I think, but I don’t remember. The “whorl”, whose only purpose is to keep the cop away from the maidens is a 1″ disc cut from a lasagna noodle box. The maidens themselves are 6″ lengths of 3/8 inch dowels with small eye hooks screwed in about an inch from the top. The drive band would slip if it ran directly over the needle so I fed on to the needle a piece of 1/4″ dowel. I just drilled a centered hole the same diameter as the needle. To put a groove for the drive band into this drive pulley, I mounted the needle (with the dowel on it) into a drill. I ran the drill while holding the edge of a file against the center of the dowel. It’s a poor man’s lathe, probably not the safest thing to do, but I was careful. You can see the groove in the dowel more clearly here:

The drive band itself is a piece of gimp, a.k.a. craft lace, a.k.a. Rexlace–that stuff that you make boondoggle keychains out of at summer camp. I recommend using either “Nite Glow” or one of the glitter colors because they have a grippier texture. I went with the “Nite Glow” because how could I not? It glows in the dark! How many spinning wheels in the world have glow in the dark drive bands?

Now back to those 12″ plywood circles. I noticed in several photos and music videos(?) that many traditional charkhas have zig zag or criss cross lacing between two discs like this (15 seconds into the video):

Notice btw that she does not have a glow in the dark drive band, but that paint job and mirror bedazzling treatment is pretty sweet. I might have to pimp my ride that way, too… Anyway, to lace up the drive wheel I used a compass and some geometry-class-style fun to lay out 24 equally spaced holes 1/8″ in from the rim of the 12″ discs. I drilled the holes simultaneously through both discs, stacked with their centers aligned. Then I separated the discs using a 1″ wooden spool. The spool sits centered in the wheel. I drilled a 1/4″ hole through the two discs and spool then hammered some 1/4″ copper pipe into the hole. The axel itself is some 3/16″ cold rolled steel rod: This metal-on-metal arrangement makes for fairly low friction and fairly low noise when spinning the wheel. The axel itself does not turn. I used a needle and some lace weight cotton to lace up the wheel:

It took some experimentation to figure out how to do the lacing. In this scheme, the lacing never goes over the edges of the wheels, but if I did it again, I’d probably just do it the simpler way that shoes are usually laced up. Here’s the spindle in action working on some cotton punis that I carded from cotton balls.