We haven't had many book reviews on the blog recently, but I just finished re-reading Michael Pollan's 2008 NYT bestseller, and it's worth discussion, especially in light of a recent business trip to DC/Virginia.

Pollan condenses his entire answer to "what should we humans eat in order to be maximally healthy" as "Eat food. Not too much. Mostly plants." Each of those three sentences contains a wealth of meaning, and without running afoul of fair-use laws, or paraphrasing the whole book, I'll try to summarize the key elements, specifically with an eye towards "what should I eat" advice.

"Eat food" sounds obvious, but he spends a couple chapters pointing out that, thanks to the food industry and helped along by a few pivotal government policies, eating "food" is actually rather difficult these days, since most of what is available in supermarkets actually falls under the classification of "food-like substances". Much of the "Western Diet" has been turned away from whole foods and instead consists of products that have two primary components, a base or substrate, and nutrients added after the fact. This construct has the advantage of being cheaper for the food manufacturer* and cheaper for the vendor b/c of longer shelf lives, and the consumer has been hoodwinked by "nutritionism" into believing that this substitution has been in their best interests so there are no complaints from that corner.

The second sentence, "Not too much", is the most straightforward - we as a nation eat way too many calories, regardless of their source. Pollan mentions the (dubious) advice to limit our red meat and saturated fat intake, and notes that we have, to some degree, succeeded in decreasing the fraction of "bad" food in our diet. However, this isn't really a result of actually eating less of the "bad" foods but instead just consuming more total calories while holding our "bad food" intake roughly constant.

This leads into the third piece of advice, "mostly plants", which is where we as a culture so frequently fail. Eating is pretty much a zero-sum game, and so if we eat more industrial foods, we do so either at the expense of something else (or by increasing our total caloric intake which isn't great either)... and generally that sacrificed item are vegetables. But "mostly plants" means more than just trying to choke down xx servings of veggies per day; it means paying attention to what the meat that you consume itself consumed. It means eating more plants and fewer processed foods. It means eating grass-fed organic beef.

The sub-title of Pollan's book is "an eater's manifesto", having also mentioned the important distinction between "consuming calories" and "eating & enjoying food". In Defense of Food contains a very good chapter that includes his advice on how to eat well (you really should buy the book anyway), but here are a few nuggets.

And here's where we touch on uncomfortable subjects - Pollan mentions that there is a trade-off in eating between quantity and quality, and that the American system has focussed on the former, at the cost of the latter. "Turning out vast quantities of so-so food sold in tremendous packages at a terrific price is what we do well." As such, eating in America has very significant socio-economic under-(over?)tones: one must make the choice between eating healthily and spending more $$, or saving money while giving inferior/unhealthy meals to your family. Those of us who are lucky enough to have the extra time and money to acquire good food can do so, depending on where we live, but a large portion of the country does not have that luxury. Certainly we can hope that the more of us that shop at farmers markets, join CSAs, and plant gardens, etc will slowly shift the nation's food culture in the right direction, but is that enough? Surely not, but if the effort to improve our personal diets seems daunting, overthrowing the industrial-food empire seems impossible. 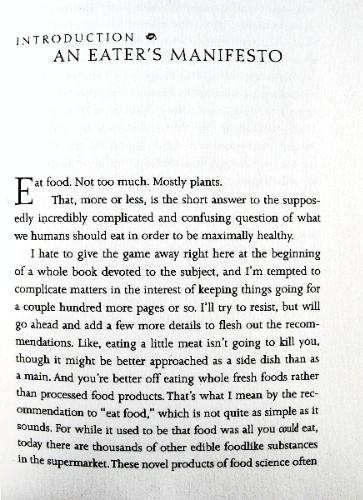 * really, "food manufacturer" sums up a lot that is wrong with current society. Farmers no longer grow food, they grow plants that, through several mechanical and chemical processes, are turned into substances that end up on supermarket shelves. What are the top two crops in the midwest? Corn & Soybeans, neither of which can be eaten by humans straight off the plant. Why corn and soy? Because those two are "among nature's most efficient transformers of sunlight and chemical fertilizer into carbohydrate energy (corn) and fat and protein (soy)."[p117] Incidentally, I highly recommend the documentary "King Corn".