Guess what I just did. Here’s a hint: 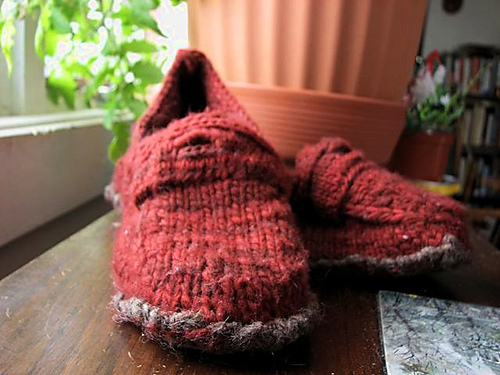 I just finished knitting these Malabrigo Loafers by Julie Weisenberger last week. They took me two evening sittings. I think I’ll be making several gift pairs next year. The pattern called for Malabrigo worsted, holding two strands together for both the soles and the uppers. I substituted some tougher seeming, undyed,  local handspun wool (produced by the Baa Baa Sisterhood) for the soles. This may have been unnecessary—I never had any difficulty breaking worsted weight wool yarn by hand until I met Malabrigo. It actually has pretty high tensile strength despite feeling so soft. I don’t know whether tensile strength correlates well with resistance to abrasion.

Durability aside, I think the baa baa sisterhood wool gives me better traction than Malabrigo might. The soles are knit in garter stitch, so they have some texture to them. They don’t feel too slippery to me, but my office is carpeted as is our whole apartment other than the kitchen. So I probably won’t feel the need to add any non-skid devices to the soles for some time. Last week I had to shuffle some cars around in the snow and ended up parked with my driver’s side door right next to a two and a half foot snow bank. I trudged through it and up the icy driveway in these. Not only did I not slip, but my socked feet were still warm and dry! Wool possesses many amazing material properties: high tensile strength, good insulation, and even water repulsion.

Prior to the addition of the penny slot bands, the slippers looked like this: 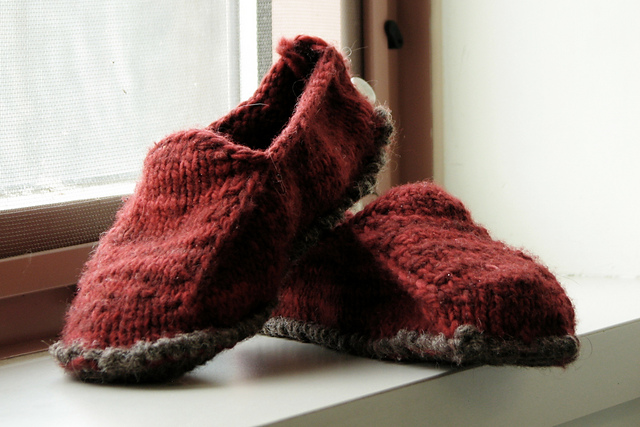 If you make the penny bands, be sure to tack down the stitches on either side of the penny slit, or the penny will just roll around inside the sewn-on band.

Each loafer upper is knit on two circular needles in such a way that the stitches of the right half  and the stitches of the left half always remain on their own dedicated needle. I felt like I had a lot of needle ends and yarn strands sticking out while I was working; I used two center pull balls, one for each strand. However, I wouldn’t try making these any way other than with the two circs. It makes it easy to maintain the symmetry of the slipper. The pattern called for size 10 needles for the large size, but I had to use 7′s to get gauge, and the slippers fit my mens-size-10 feet just right. A Happy New Year to All! Over the holidays, I finished the Rogers-esque cardigan. All that remains is to get the buttons and sew them on. 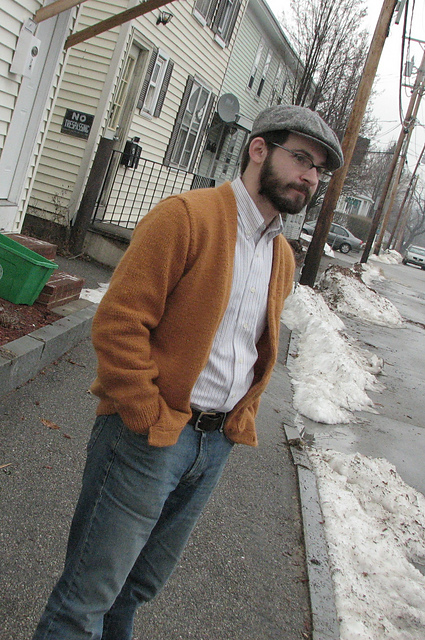 I made the 36″ chest size, which amounts to a little more than 1″ of negative chest ease for me. (I learned some fashiony terms in making this project; “ease” is the difference between the circumference of the sweater and the circumference of the body, measured at the same point, in this case the chest. If the difference is negative, it’s called negative ease, and means the sweater will have to stretch a little to fit the wearer).

Overall, I’m pretty happy with the way the cardigan turned out, but I wish the sleeves were a little less bunchy. I think they look a little too baggy to go along with the “vintage” fit that I wanted for this sweater. The problem seems to be more that they are too long than that they are too baggy. Shorter sleeves would bunch less. If I’m feeling brave I might rip out the cuffs and re-knit  the ends of the sleeves about an inch shorter. Have any of you ever done this?

Here are the parts after steam blocking, but before assembly. Blocking rocks. I just blasted lots of steam into the parts with an iron then let them dry on the rug. The stitches magically  evened themselves out. I might block again after putting the buttons on. I’ll have to see how the cardigan fits when buttoned before I decide about that.