In honor of 20 years of Simpsons (holy crap, really?), the November issue of Playboy is going to have Marge on the cover, posing with a bunny chair and little else: 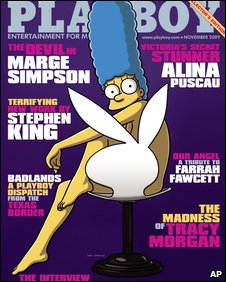 No word on how much of Marge will be shown inside the issue, but "it's very, very racy," said editorial director James Jellinek, adding "she is a stunning example of the cartoon form."

"We knew that this would really appeal to the 20-something crowd," said Playboy spokeswoman Theresa Hennessey.

Apparently the Simpsons issue goes on sale in newstands next week, but subscribers to the magazine will find their copies "have a more traditional live model on the cover."