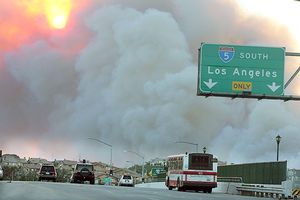 Sorry to all for the lack of an update this past week, but things have been a little busy. The last couple days have seen an improvement in the weather, but basically the reason why the fires were so bad earlier in the week was that we had "Santa Ana" weather conditions: hot, dry, strong winds coming from the East, right off the desert. Throw in the fact that we've had something like 25% of the normal rainfall this summer/fall, and 80 mph winds are going to make any fire burn pretty intensely.

So, what started out as large-but-not-crazy-fires grew very quickly, and more importantly jumped around - all it took was one burning palm frond or tumbleweed to get blown a quarter-mile downwind, and all of the sudden the fire took off at that point. What really freaked people out was Friday night/Saturday morning, when the fire zoomed several miles and jumped I-15, a billion-lane freeway. So, I don't know the total, but well over a half-million people were evacuated. Part of the Miramar airbase to our immediate East was evacuated, but the UCSD campus wasn't touched, we just had a constant rain of ash, and breathing sucked. (K said it reminder her of Katmandu, where she had a chonic cough for the 6 weeks she was there, but cleared up within an hour of leaving the city.) Some places farther closer to the fires/more directly downwind got an inch+ of ash, like a powdery snow (that would choke you if you took a step).

Here's another description, if you feel like reading. The days kinda run together for me - Mary says she didn't notice it until Sunday, I noticed it Friday afternoon but we're on the top of a hill. As of yesterday they started opening up some of the evac areas, but even though they can go back in, the water is polluted/shut off, and things are a mess. There was a lot of charity this past week, hopefully people remember that it's still needed.

Finally, a big thank you to all the firefighters, local and from Norcal, Wyoming, Oregon, etc.

So, things got bad there... to the point where my attempt to reboot remotely didn't even work.

However, Andrea gave dactyl a hand by pulling the plug and now everything looks peachy.

Time to start gushing about the Sox.

And wondering if Michael is on fire or not.