(1) Soldier's casket transported on a baggage cart. Not cool.

(2) In keeping with the disrespect our military theme, more and more troops are now having to sue in order to avoid the Anthrax vaccine. "I know, here's a good idea: these heroes fight for our country, let's treat them like guinea pigs"? wtf.

Actually, this is made all the more interesting since K just worked on a study showing a possible positive correlation between Tetanus booster shots and ALS. hmm.

Sometimes, you can do no better than the headline. The story is that two dolphins swallowed some bits of plastic that were in their acquarium, and despite best efforts, surgeons weren't able to get the job done. Enter Mr Bao, who is 7' 9.85" - they wrapped the dolphin's jaws with a towel to save his arm and then he reached down their throat and pulled the plastic shards out of their stomach! That's pretty impressive.

Anyway, Nathaniel, I guess you have a job waiting if Stacy doesn't work out for you? (and yes, I know that's not how it's spelled.)

Seriously, the dude must be turning in his grave - they're now talking about a Mustang wagon? Yeesh, I'm definitely shorting more F stock tomorrow morning. To give you an idea of which way the good ship of Henry is headed, just check out this quote: It's a case of reaching out to the men or women who keenly identify with the Mustang, but for various reasons - whether it be family, recreational or other - need a more versatile car than a coupe." Ugh. 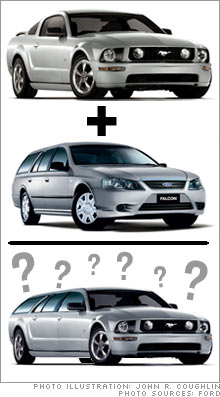 Tv : watching the Seahawks give the game away to the 49ers

It hasn't been all work.

There are a few issues with playing poker down here that I'm trying to sort out.

First of all, people blab to everyone when there's going to be a poker game which results in way too many invites being given out. The last game had 10 people, about half of which were newbies. It doesn't make for a fast-paced exciting game and it's going to be tricky to figure out a way to non-invite people.

Second, poker games have ringleaders. I figure that, when I was there, Chris and I were co-ringleaders. We generally thought that games should run the same way, agreed on the people that should be there, etc... The co-ringleader here actually goes to Vegas to play once or twice a year and has very set ideas of how things should run. Chips MUST be put into the pot at the end of each round of betting. Cards MUST be collected by the dealer whenever someone flops. I don't really have anything against the rules, but it slows the game down. More so when you have a lot of people just learning the game and things are going slow anyway. Maybe I'll start solving the numbers problem by not inviting him. 🙂

Why no blog posts lately?

My excuse has been long days.

There are plus and minuses to working here. We have a staff that will print out your conference posters for you. That's definitely a plus. On the minus side, since EVERYONE goes to the big conferences, you have to turn in your posters two weeks in advance. Thus, I usually did my posters up at Dartmouth in the week after Christmas. Here, I have to have it done by next Tuesday. I'm also not really used to the whole "get things approved by your collaborators" thing. Only one of them has done any work giving me advice... makes me wonder why I need their approval at all.